plan b: The good milk – benefit for cows, climate and customers

Cappucino, butter, cheese sandwiches: milk is in everything. It can cost a bit more: consumers are increasingly attaching importance to fair wages for farmers, animal welfare and the eco-balance.

Farmers can hardly live off the low milk prices. Factory farming is cruelty. Cattle are considered climate killers. Good reasons to look for alternatives. “You’re the boss here” is the name of an initiative in which everyone decides for themselves how much a litre of milk should cost.

Consumers were able to vote on this in an online survey. Every click had consequences for production: more animal welfare, more regionality, more money for the farmer – all this was immediately reflected on the price tag. Result: an above-average price for high standards. “We are prepared to pay more for our milk if we can be sure that it contains what it says,” says Barthelmé.Now his milk is on the first supermarket shelves, and it will be exciting: do consumers really buy the milk they have chosen online?

Almost every day a baby calf is born on the farm of farmer Lenz in Saxony-Anhalt.

A high-performance farm with 350 cows. And yet: seeing mother and calf take their first steps together is always a moment of happiness for him. “We farmers don’t want to keep our cows badly. It’s just that we often lack the money for a good life,” says Frank Lenz. Nevertheless, the forty-year-old wants to keep going, and he has big plans for the conventional dairy farm, which he is running in the eleventh generation. His first step: The calves stay with their mother after birth and are not separated from her immediately, as is usually the case. They are then allowed to drink from udders for a whole three months – instead of from buckets in calf pens. Milk that the farmer can no longer sell. But he is determined to prove that it is possible: more animal welfare, even on a large farm.

Mudar Mannah was on his way to becoming a successful surgeon when he decided to dedicate his life to another task after all: as a climate saver. He wants to help reduce the emission of climate-damaging gases – especially methane, which is many times more harmful than CO2. Cattle produce huge amounts of it. Mannah was therefore looking for a plant-based alternative to cheese. “One that tastes good,” he says. That’s how he came up with the cashew nut. He now makes vegan Camembert from it, and with a good eco-balance, despite the transport of the nuts from Vietnam. “We simply have to rethink,” he says on the subject of climate change, “our planet resents us. We can’t go on like this.”

Produce and consume more consciously – not at the expense of the environment, animals and farmers: That’s what it’s all about. Good milk, that’s what makes it! 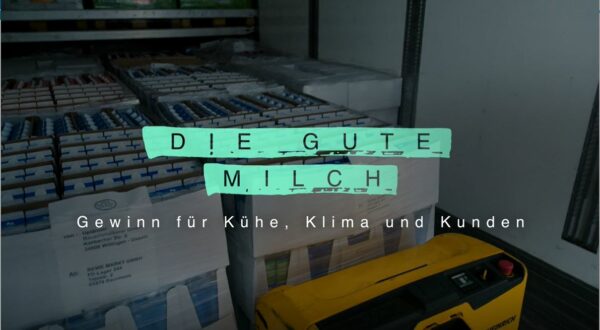