“You can change your life in a dance class” Royston Maldoom He is the secret star of the documentary film Rhythm is it! He is the magician who, throughout the entire world, gets even the most difficult children back on track, gets them out of crises and demands that they face life: Royston Maldoom, choreographer and dance teacher. “Dance requires everything from a person all at once: body, mind, soul and your motor functions,” Maldoom says. “But most of all, artistic work teaches you how to face conflicts. You can do anything you want to do,” he encourages his pupils. “You have the power. You just don’t believe in it yet. You have to learn to celebrate yourselves. Don’t think that we are just dancing. Art can change your lives!” People have already called him the “child whisperer.“ Royston Maldoom, who has been developing and rehearsing his choreographies with the “Community Dance Network“ for 30 years, has indeed worked with street kids in Ethiopia and with traumatized teenagers in Bosnia. In addition to all this, he has also led projects with senior citizens, prisoners, and the physically or mentally handicapped. He conveys to them all the love of dancing and, with it, a new productive feeling of their own self-worth. Maldoom himself discovered his passion fairly late for a dancer. “Until I was 22, I had no notion of culture, dance or theatre – let alone ballet,” he remembers. “It was pure coincidence that my friends in Cambridge dragged me to a film about the Royal Ballet. That was when Rudolf Nurejew had fled from the Soviet Union, and there was a great to-do about him. I saw this film, abandoned my studies (I was studying agriculture at the time), and decided to become a dancer.” He immediately enrolled in a small ballet school. Despite the fact that he was relatively old for dance training, his passion for dancing helped him win scholarship after scholarship. He practiced obsessively to become a perfect dancer, but he had to admit that he was physically not able to reach that goal. Without letting himself get discouraged, he became more and more enthusiastic about choreography. At first he worked with professional dancers, but that soon bored him. He moved away from London, out into the country, to start over once more from scratch. A man from the village asked him if he wouldn’t be willing to give him and his friends dance lessons. Soon, Royston was working as a choreographer with people who had never danced before. He quickly learned how to deal with people, and soon after he also worked with “problem children“ and people with disabilities. This was the beginning of his career as a socially motivated choreographer that would take him around the world. 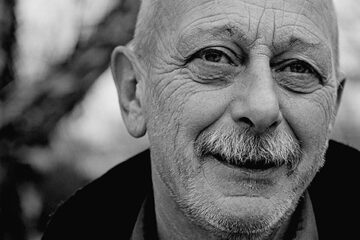