What we eat, what we buy – hardly any company has as much influence on our daily lives as Edeka. The Hamburg-based group is by far the largest food retailer in Germany. Yet the cooperative started out small:

In 1898, 21 owners of grocery shops in Berlin got together to buy groceries more cheaply. The “Einkaufsgenossenschaft der Kolonialwarenhändler im Halleschen Torbezirk zu Berlin”, or E.d.K. for short, was born. Edeka consistently expanded throughout Germany. What has remained is the concentrated market power: if a manufacturer of branded goods is not listed with Edeka, he loses about a third of his turnover.

Ralf Ehlers is one of about 4000 Edeka merchants, and thus also co-owner of the Hamburg headquarters. A fourth-generation merchant: the nucleus of a 40-square-metre bakery in the Lower Saxon municipality of Bispingen has become a supermarket with 1500 square metres of sales space. The steps of expansion wrote family and village history: When the corner shop became a supermarket in 1967, some of the older female customers refused to use a shopping trolley. They didn’t know how to push “the thing” through the aisles.

“EDEKA: From corner shop to supermarket giant” delves deep into the world of the supermarket – with some bizarre findings. When the reporter, Manfred Uhlig, conducts an interview with one of the order pickers in the central warehouse in Minden, a voice interferes: The computer from which the employee receives his instructions. No comparison with the founding days of Edeka: back then, goods were still taken out by handcart and a simple order slip counted. 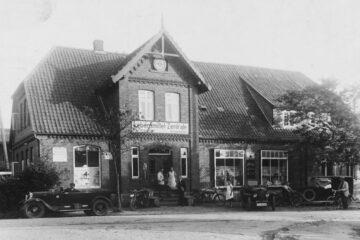