A World Power on Quicksand – Bush against the Ayatollahs

When Ayatollah Khomeini announced the Islamic Republic of Iran after driving out the Shah in the beginning of 1979, America suffered a grave defeat in the Islamic world and lost its closest ally. At the time, this Shiite Revolution was seen as a local phenomena because only around 10 percent of the 1.3 billion Muslims worldwide are Shiites. The situation has changed since the fall of Saddam Hussein. In the Middle East, a geographical bridge of this religious denomination is becoming apparent, one which reaches from Iran across Iraq to Lebanon. Iraq is becoming increasingly important in this picture. Sixty-five percent of the population are religious Shiites, and the denomination’s most important shrines lie in the southern part of the country. In this documentary, Peter Scholl-Latour will take stock of the situation 6 months after the fall of Baghdad and the overthrow of Saddam Hussein. Will America fail in Iraq? Which roll does the Islamic Republic Iran play and what influence will it have on the Shiites in South-Iraq? How serious is America’s threatening demeanor towards Teheran? 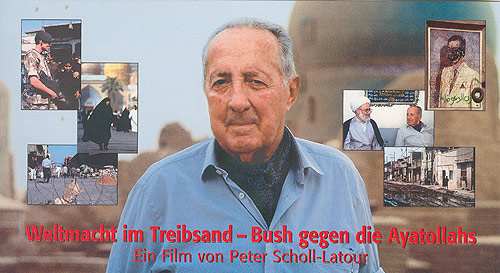