She was extreme and insatiable. She loved power – and men. Catherine the Great: a German princess on the tsar’s throne. She supposedly had 21 lovers, but only one knew how to unite politics and unrestrained passion. Grigori Potemkin, the empress’s favorite and general, was the only one who succeeded in kindling a deep love in her. Two fascinating and ingenious personalities who worked hand in hand to carry out their plan: conquering the South all the way to the Black Sea in order to finally turn Russia in to a European superpower. Even today, the unusual love relationship between Catherine and her “conqueror” is connected with famous legends. Did this prince, the man who knew exactly how to use theatrical gestures such as carrying a jewel-encrusted sword to impress people, really build “Potemkin villages” for his lady? These Hollywood-like facades supposedly lined the bank of the Dnieper River when Catherine went to see the success of their mission. Computer animation illustrates the historical fake, and scientists unveil truth behind the myth. Reenacted scenes round out the story and show important episodes in the empress’s life and shed light on the historical facts. A retrospective of her forced marriage with the insane successor to the throne shows her absolute thirst for power. She bore the most serious humiliations while she waited to grow powerful enough to overthrow the tsar and her impulsive, unpredictable husband. She then seized the crown herself, supported by her then lovers. As sole ruler, she originally wanted to follow the ideas of Enlightenment and free the Russian people from serfdom. But her desire for reform failed because she was in the habit of giving land and hundreds of thousands of serfs as gifts, and not only to her lovers. She even expanded serfdom throughout the conquered Ukraine, and sent an army of millions of colonists there. The French philosopher Diderot said of her: “Catherine may do whatever she pleases”. Scenes of poverty and misery create a contrast to the dizzying splendor of the St. Petersburg palaces where Catherine lived, and to the luxurious “love nests” which she gave to her favorites. High-quality documentary pictures sweep the audience away to the breath-taking world of the Russian tsars. 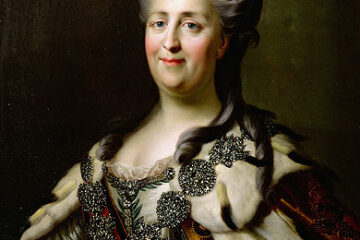