The squatters – rioting against vacancies

In December 1980, violent street battles shook West Berlin. The reason was the building and housing policy. Thousands of apartment buildings stood empty and rotted, while there was a great housing shortage. This was deliberate, because the policy was to demolish and build new. But against this, more and more houses were squatted, in a short time there were over 160. Again and again there were violent clashes when the police took action against the squatters. The SPD senate fell, new elections were held, and the new CDU-led senate finally resorted to violent evictions. In September 1981, 18-year-old Klaus-Jürgen Rattay died. Lengthy negotiations followed. Finally, about 80 houses were legalised.

But the Berlin events were not an isolated case. As early as the beginning of the 1970s, houses were squatted in Frankfurt because tenants were being forced out of their houses in the West End in order to build office palaces after they were demolished. Even then there were brutal street fights, and the militant struggle against this eviction policy was led mainly by the Frankfurt Spontis, among them Joschka Fischer and Daniel Cohn-Bendit.

When the Frankfurt Häuserkampf was already history and the scene in Berlin was gradually pacified, a new conflict broke out over Hamburg’s Hafenstraße, which led to civil war-like conditions. Only with difficulty could the conflicts be calmed down. The houses on Hamburger Hafenstraße are still a thorn in the side of many a citizen today, but at the same time they are an attraction on every city tour. 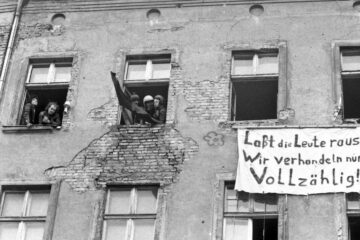 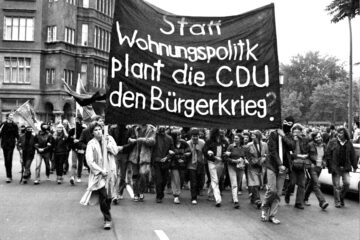